Emerging variants of severe acute respiratory syndrome coronavirus 2 (SARS-CoV-2) are causing a third wave in Europe, and an interesting development has been observed.

As communicable variants and vaccinations have increased, several European countries have experienced a second and third wave of pandemics without commensurate increases in disease severity and mortality.

A promising development has prompted a study based on an additional factor that may influence how the virus affects people.

The concept of having a higher immune defense against the virus relies on specific SARS-CoV-2 T cells, which grow gradually based on natural exposure to low doses of the virus.

Recent studies have suggested that low dose viral particles enter the respiratory and intestinal tract and can induce the T cell memory response without inflammation occurring, resulting in varying degrees of immunization. This lack of inflammatory response could be the cause of a disproportionate level of COVID-19 rates, disease severity and mortality in the population.

A recent analysis of German data revealed a drop in death rates from COVID-19 in all age groups, including older groups. This can also be confirmed by surveillance reports from the European Center for Disease Prevention and Control (ECDC), which relayed that a majority of European countries have experienced high rates of COVID-19 in 2021 without a commensurate increase in rates. mortality.

The hypothesis of low doses of virus escaping from masks, which could reduce the severity of the disease in those subsequently infected, has been proposed to explain the possible increase in rates of asymptomatic infections.

The Italian authors of this article, published in the journal Virus, took this hypothesis and expanded it to include viral particles suspended in the air or on inanimate objects as a possible source of T cell immunity due to repeated exposure to low doses, potentially explaining the viral immunity found in uninfected individuals.

The distribution of COVID-19 in Italy from February 2020 to April 2021 illustrates an increase in asymptomatic and paucisymptomatic cases, where more infected people had no symptoms or a few symptoms such as malaise (see Figure 1). 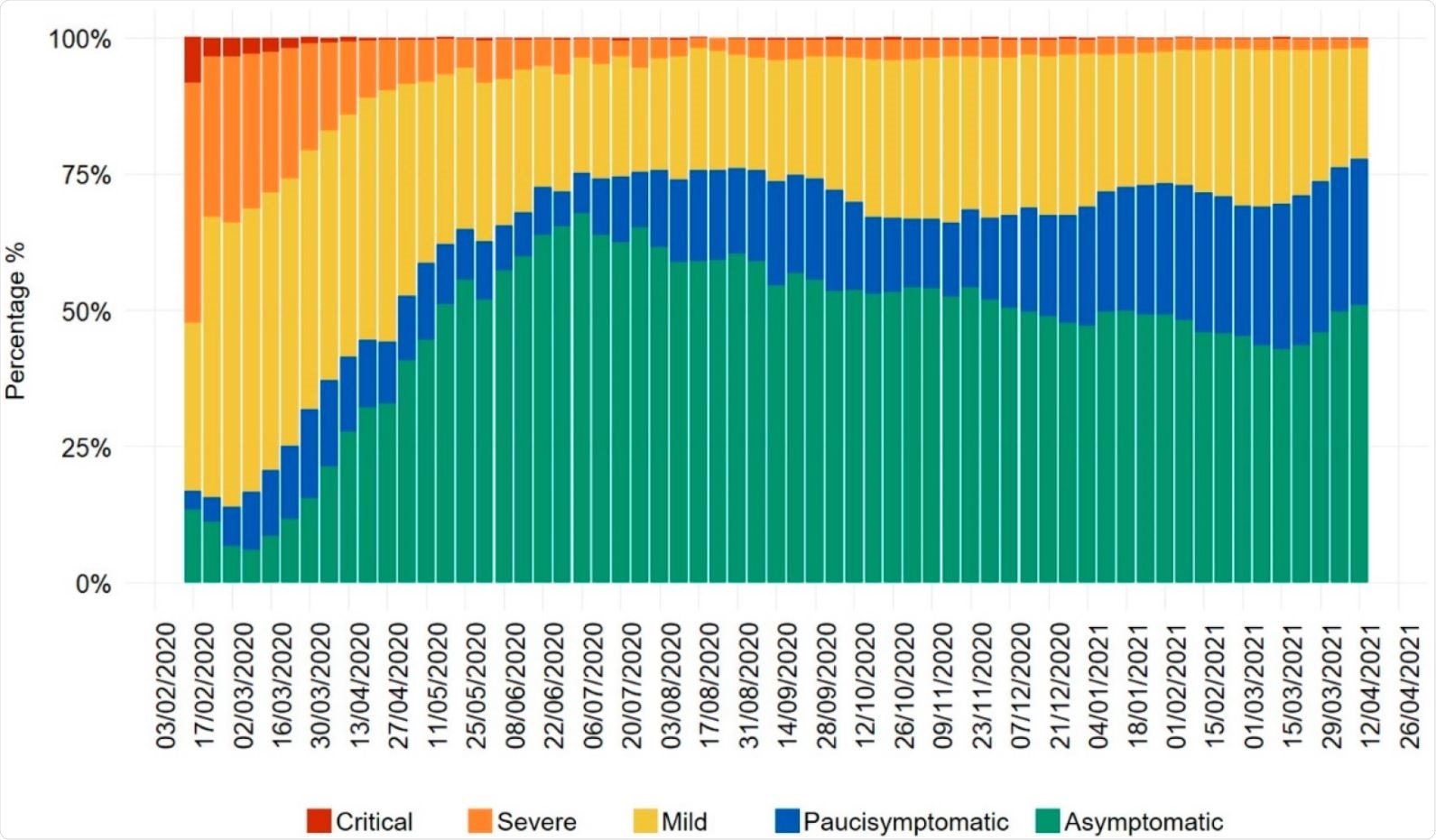 The development of natural immunity in the population may explain the increase in SARS-CoV-2 infections, with new variants being easily transmitted, but resulting in a low number of serious illnesses and a greater number of mild infections.

This result may cause the SARS-CoV-2 pandemic to transition to an endemic, similar to cold coronaviruses, with the possibility of the virus losing potency. Low dose exposure to SARS-CoV-2 in the environment can therefore help reduce the severity of infection.

How low doses of the virus help immunity

With studies suggesting that a higher T cell response can be achieved by low levels of antigen stimulation, the concept of low doses of antigen has sparked interest in vaccine development. Mouse-adapted MERS and SARS models confirmed that low doses of the virus lead to milder manifestations of the disease, which was also observed in hamster models and ferrets infected with SARS-CoV-2 .

The Italian study proposes this increase in immunity thanks to low doses of the virus entering through the lungs and respiratory tract or the gastrointestinal system by touching food with contaminated hands.

As hand washing is not a total sterilization method to remove viral particles, it may contribute to the introduction of small doses into the system and into the intestine, with the epithelial cells expressing the converting enzyme. angiotensin 2 (ACE2) which can be infected with SARS. -CoV-2.

Unlike the respiratory tract, intestinal exposure has been shown to be less pathogenic, which may explain the asymptomatic cases of COVID-19.

T cell responses have been shown to be polyfunctional, stable and can last for six months after infection. SARS-CoV-2 specific T cells with a rod-like memory phenotype have been identified in recovered COVID-19 patients, underscoring the long-term impact of memory T cells in the immune response after viral infection.

A key study of Swedish subjects found that these SARS-CoV-2 specific T cells were found in 67% of exposed family members who had shared a home with the infected individual, further adding to the theory of immunity after repeated exposure to low viral doses.

While large doses of virus reaching the airways can cause the death of airway epithelial cells and trigger the production of inflammatory cytokines and chemokines, which recruit immune cells to the lungs, low doses that reach the same area are less likely to trigger this massive response.

The lack of an inflammatory response associated with low doses allows viral antigens to be processed and presented to CD4 + or CD8 + T cells via the major histocompatibility complex, which can lead to the development of an adaptive immune response against the virus. SARS-CoV-2.

The future of COVID-19

Since surgical masks are worn more visible to the public, the low doses that can escape can act as a “virolation” process which can increase asymptomatic cases of SARS-CoV-2 and impact immunity. overall.

The U.S. Center for Disease Control and Prevention (CDC) said the relative risk of viral transmission from inanimate objects of SARS-CoV-2 is low compared to direct contact, including droplet transmission and by air.

In addition, a systematic analysis of the stability of the virus also indicated that the concentration of the virus on plastic and steel decreases further after 72 hours.

The future of the pandemic may lie in a transition to an endemic where the virus may still be true and fine with emerging variants, but low doses from infectious individuals and inanimate objects may help with asymptomatic or paucisymptomatic presentations of. the infection.

It can work the same as the common cold and allow for a more gradual future with increased natural immunity for people around the world.